We have just returned from a week-long stay in Frankfurt Germany at Light and Build, the largest lighting exhibition in the world, where over 2,500 exhibitors and 216,000 visitors attend the exhibition that covers 6 halls at the Frankfurt Messe and takes over three days to cover. Light and Build is the place to be if you want to keep abreast of what’s happening and what’s going to happen in our industry.

The biggest news at the fair was Osram have become Ledvance by Osram with the aim of being simply Ledvance at some stage in the future. Osram had all of their new range of retrofit LED lamps on show as well as their “over the counter” Luminaires. 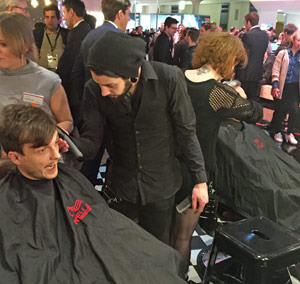 The Osram stand was one of the biggest at the show and very well attended. There was an area on their stand known as 1906 to commemorate the formation of Osram in 1906, drinks and food were available in this area and you could even get yourself a haircut on the stand!

There were, as you would expect, many companies offering LED Variants to Squirrel Cage or Edison bulbs both dimmable and non-dimmable, but there were plenty of new innovative lamps on display also. Some wonderful large Edison lamps in various shapes and styles, we particularly liked the 250mm Diameter Megaglobe lamp that caught our eye. 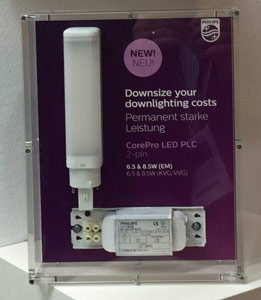 LED was clearly the theme on most stands with most traditional filament Lamps now having an LED retrofit available. We did see however a few new types Philips showed their LED PLC compact lamp “CorePro LED PLC” and we also saw LED PLL replacements from Chinese manufacturers.

We also noted that most manufacturers are now offering Dim to Warm LED Lamps. This technology decreases the colour temperature of the lamp as it is dimmed down and increases it as it is lit up, this is to replicate how a filament lamp behaves when dimmed. Megaman’s Dim to Warm lamps were a particularly good example. 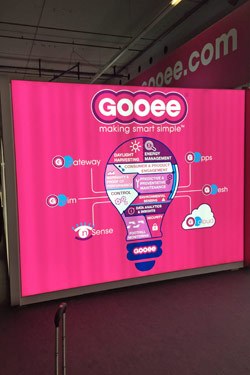 Smart lighting control has been a big topic over the last couple of years and many Zigbee controlled lamps and fixtures were on display as you would expect. But some companies had taken things a stage further. We saw Chinese streetlighting manufacturers displaying LED Streetlights that were WIFI enabled, had car charging stations and controls that could send signals back to a central station to monitor traffic flow and identify bottlenecks in road systems at certain times of the day.

The next step up from this is GOOEE which provides many of the benefits of organic response but includes footfall monitoring whereby you can get a clear picture of where most of the footfall is within an office or retail store, this will be particularly useful in planning out a store or making decisions as to where promotional merchandise should be placed

There were some really impressive decorative fixtures on display in the decorative halls that really showed off some wonderful creative talent. British manufacturer Plumen exhibited there range of Plumen 1 and Plumen 2 lamps along with a new clever click together rod system to create modern looking pendants.